Small Box with a Revolver 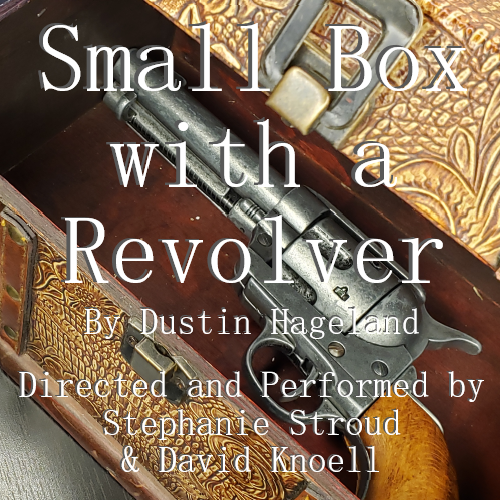 Two painfully polite and questionably intelligent strangers wake up in a locked room with only a curious box in the middle of the room to guide them. Join Gene and Sam as they become friends, demonstrate poor public safety, and do their best to comply with instruction.

About the Artists: Dustin Hageland (He/His) is Originally from Washington state, Dustin received his BFA in Creative Writing from Western Washington University and his MFA in Theater from Southern Illinois University Carbondale. He is the author of such plays as Small Box with a Revolver and Remembering Abbie “B.” During 2020 and 2021 he produced dozens of virtual nights of shorts, a new play festival, and several other unique live streamed projects. He writes primarily comedy that tackles social or political issues.

David Knoell (He/Him) David is new to Salt Lake City, having recently moved here from Chicago, where he worked as a director, actor, writer, musician, and producer with the Second City Training Center, Chicago Dramatists, Stage 773, The Playground Theatre, The Pub Theatre, and more. Previously, he was seen performing on professional stages in Orlando, FL. David was featured in the 2021 Great Salt Lake Fringe Festival performing the musical sing-a-long "One Man, One Guitar, Superstar". David earned his BFA from the University of Nebraska and his MFA from University of Central Florida. dktheatrical.com

Stephanie Stroud (She/Her) is an Associate Professor of Theatre Arts at Westminster College. Clowning, devising, movement, and new play development have been her focus for the last decade. She holds an MFA in Acting from Penn State University, and has studied with SITI Company, Neo-Futurists, Rimini Protokoll, and Tectonic Theater Project. Stephanie is a Member of Actor’s Equity Association, Association for Theatre Movement Educators, and an Associate Member of Stage Directors and Choreographers Society. stephaniestroud.com

No performance available for Small Box with a Revolver

Book your tickets for Small Box with a Revolver

Book your tickets for Small Box with a Revolver

2022 All rights reserved. Powered by